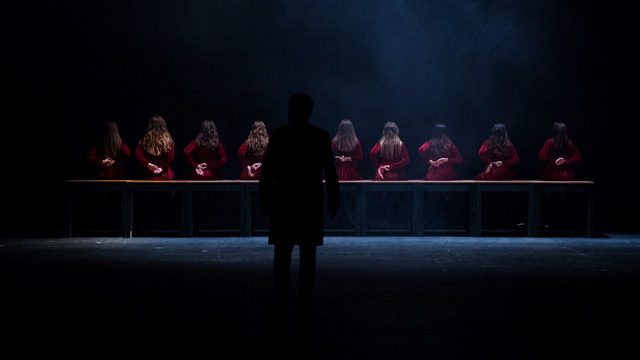 Running time: 125 minutes with one interlude

Fragments on The Crucible (director’s notes)
In Arthur Miller’s play “historical witches” are only superficial, the author, as we know, had in mind the “witch-hunt” that engulfed the USA in the 50’s of the previous century, when Senator McCarthy hunted for communists and all those who had any relations with them. What this well-known historical event makes equally interesting today is the timelessness of the topic, since in any time a society can recognise a certain “witch hunt” in its midst. (…)
History in a way always speaks about the present time. (…)
Salem is actually a metaphor. (…)
One of the characters in the play says, “Dark forces are in Salem, but they are within us… We had better look for evil spirits in ourselves“. (…)
What I find especially interesting in this play is how people behave when the usual “brakes” of common sense fail to function and how easily the reign of terror in which no one is safe emerges. How one small, closed community, all of a sudden becomes evil?
When I say “evil”, I primarily think of the evil that deceives human consciousness, evil that pretends to be the truth, which it is not. A lie presented as the truth is evil – this is what constitutes the perversion of the truth. (…)
I am also interested in the theme of fear as the main instrument for manipulation with people. (…)
During quite so many years, I’ve had the feeling that I have been living in some sort of “Salem” (the whole world increasingly looks to me more like Salem), in which one constantly hallucinates – sees what others do not see, makes things up, insinuates, feigns… basically – some forms of witches are being hunted, the fear of various “witches” is being spread.

JOVANČA ON HIS WAY AROUND THE WORLD