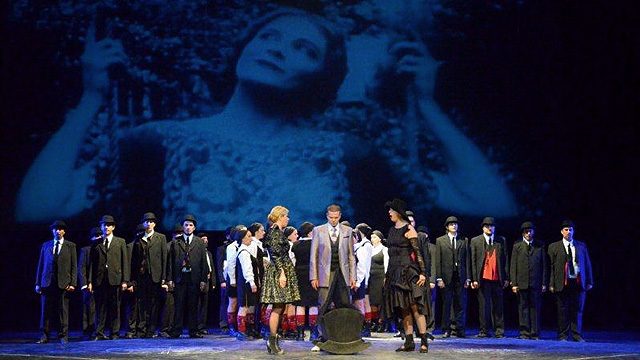 Avoiding any form of genre quest for potentially optimal guise of opera at the beginning of the second decade of 21st century, fully aware of the significance of the accepted challenge and susceptibility of melody in the festive season of our oldest national theatre, Aleksandra Vrebalov, citizen of both Novi Sad and New York, had chosen the music which “wilfully” follows the amenable libretto by Vida Ognjenovic, but even more so, the tragic faith of Mileva Maric-Einstein, also a citizen of Novi Sad. Growing up in Kisacka street, in the atmosphere of a mid-European town, and also a very patriarchal environment, Mileva managed to reach the “precise celestial orbits” of the famous European academic institutions, renown professors, personal and “traditional” emancipation, and, lastly, the mind and heart of one of the most notable persons of the contemporary times – Albert Einstein. Mileva’s entire life was composed of contradictions which inevitably took her to the spheres of sad, often dark moments: a girl, young woman of immense potential ranging from intellectual, scientific, but also naturally maternal and social, all the way to emotional, had chosen, to her own peril, the one person who, because of the gift of being a genius, walked all over her personality, destroying her hope, faith – the entire life…
Bogdan Đakovic

FIDDLER ON THE ROOF