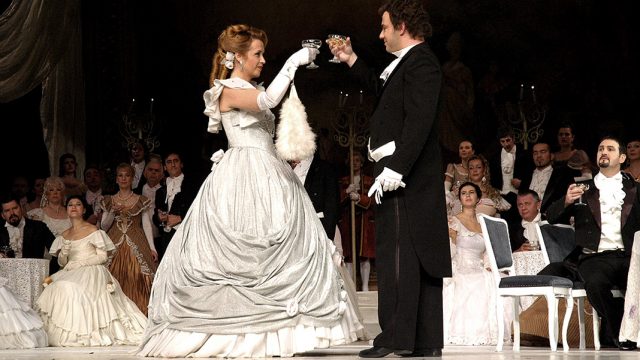 Verdi found inspiration for composing La Traviata in a deeply moving drama written by Alexander Dumas (fils) The Lady of the Camellias, which portrays the sad fate of a Parisian courtesan, who once in her lifetime finds true love, but loses it due to unmerciful prejudices of the bourgeois society, so at the end, abandoned and crushed by illness, she dies. The composer bravely set that socially contemporary plot on the stage, which triggered multiple protests because of the fact that he dared composing an opera with a contemporary topic, as it was believed that operas should be set in the past, and that it was a matter of bad taste to depict current characters and events. The overture of this opera is famous, as well as the great aria of Violetta about the joys of life from the first act. Brindisi or the Drinking Song and the duet of Giorgio Germont and Violetta from the second act enjoy an exceptional popularity.

The opera La Traviata is one of the most popular pieces of the world’s opera repertoire. It also holds a very special significance for the Serbian National Theatre Opera Department – it was the premiere of this very opera staged on 16th November 1947 that marked the opening of Opera as a separate department. It has only been absent from its stages for five seasons since then.