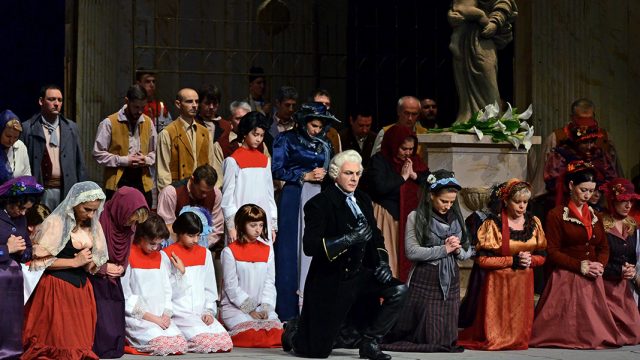 Based on historic events from Napoleon’s time, unravelling on the stage is a powerful love drama, full of passion and jealousy, which ends tragically. This is the summary of the popular drama Tosca written by the famous French writer Victorien Sardou. Thrilled with the idea of using the story for an opera, Pucinni shortened the drama significantly to make the plot more condensed. The drama about the female singer Tosca, who becomes the victim of a cruel police chief, is one of the psychologically best constructed pieces from Sardou’s huge opus. There are political motifs in the libretto – the struggle between republicans, advocates of the idea of the French revolution on the one hand, and the dark force of conservatism, on the other. Scenes full of unbelievable twists are a mixture of charm and brutality, developing into the intrigue of love drama and jealousy, as well as of lust and blackmail, sadism, violence and murder. Pucinni was inspired to write his most genuine music, relying on a luxuriously intonated melodika and orchestra. The orchestra provides the contrast to underscore what is unfolding on the stage and in the souls of certain characters.

All those features of the opera Tosca have always attracted audiences worldwide, presenting a constant challenge for the artists as well.

THE LONELIEST WHALE IN THE WORLD