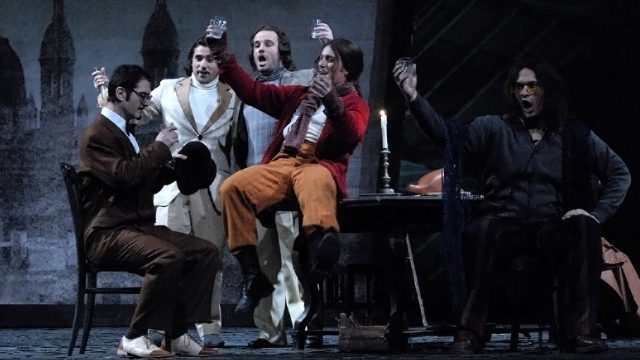 A successful musical and stage realisation of all the soloists and the entire vocal-instrumental ensemble, prepared by a brilliant, foreign (authentic, Italian) authorial crew, is what characterises the new staging of the opera La Bohemes by G. Puccini. This production (premiered in May 2007) sets a new sensibility direction of the up-dated repertoire of the Serbian National Theatre Opera.

“In a blue-greyish mist of a Parisian suburb, Caterina Panti-Liberovici’s sophisticated realist-romanticist handwriting colours the staging with more impressionist than romanticist shades and atmosphere. The sophisticated visual identity of the production in general and, of course, a suitable musical language provide this probably the most beautiful of Pucinni’s operas with the necessary, lost cheerfulness laced with nostalgia and sentiment.”

JOVANČA ON HIS WAY AROUND THE WORLD