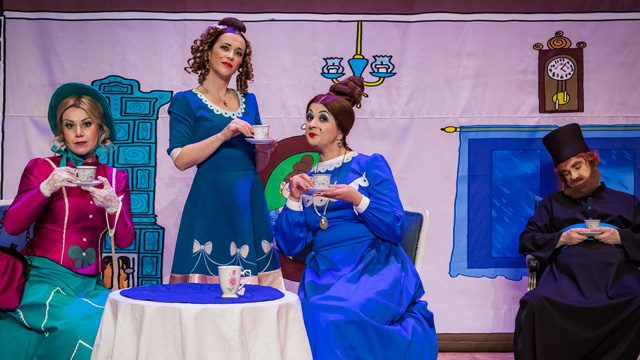 Performed by the Serbian National Theatre, this opera bouffe is reminiscent of the golden age of Serbian comedy. The story about the petty bickering among the household members of the two village priests (Friar Cira and Friar Spira) covers everything from love, strife and gossip, and features unexpected turns, folk tale elements and a happy conclusion. Populated by thrilling characters, the cosy and self-contained microcosm of the play sets the stage for ridiculing stereotypical thinking, commonplaces and prejudice. The two protagonists of the play, the two Orthodox priests live merrily in a prosperous village, whose inhabitants are so well off that they can afford not only one, but two (!) priests. Seasoned with the joys of life and the occasional drinking, their days go by smoothly, undisturbed even by the squabbling of their wives. One day, however, a young teacher arrives in the village, and the peace is quickly shattered as the priests start vying for his attention, both trying to win him over as a husband for their daughter. The role of Friar Cira is played by the Romanian-born French tenor, Antonel Boldan, a finalist at Armel Opera Festival’s singer competition.

The story of the quarrelsome, yet lively village priests was written by Stevan Sremac 120 years ago. Born in Senta and considered one of the best truly humorous Serbian writers, the author doggedly opposed the idea of adapting his story to any other form. Friar Cira and Friar Spira – based on an anegdote (common belief is that it was told to Stevan Sremac by his uncle Jovan Djordjevic, the first General Manager of the Serbian National Theatre) about a quarrel between the friars’ wives and a fight between the two friars over a son-in-law. No wonder, then, that the first – and still wildly popular – colour feature film made in the former Yugoslavia sixty years ago came as an adaptation of his novel, which has been adapted to stage and screen several times since then. Staged by the the Serbian National Theatre, this is the first time that the story of Cira and Spira is told as an opera.

A Nostalgic Music Fresco … “Friar Ćira and Friar Spira” came to life on the opera stage in the form of comical opera by the distinguished Serbian composer, academician Dejan Despić, which was triumphantly performed on the Serbian National Theatre stage in Novi Sad. […] an original, unique and successful stage-musical adaptation of the popular Stevan Sremac’s novel, coloured in light, non-malicious humour and nostalgia for the past times…
Borko Hložan, “Dnevnik” newspaper, 30 March 2018

Elite Cultural Event … Dejan Despić is consistently rooted in neo-classicism, so his stage debut, realised in the form of opera buffa in two acts, is an excellent sample of top-notch handling with the syntax and the dictionary of style, the style that in our country, but also worldwide, has been considered as the bastion of musical tradition. The technique of realistic display/portrayal/transfer of the main characters’ humour has focused the author, persistently, even stubbornly, towards the sound pantomime, caricature, and even the tonal triviality of the spoken lyrics. As if (and it is) the entire opera was one large, uninterrupted, tenacious and emphatically homogenised, a big banter…
Zorica Premate, “Politika” newspaper, Culture supplement, 31 March 2018