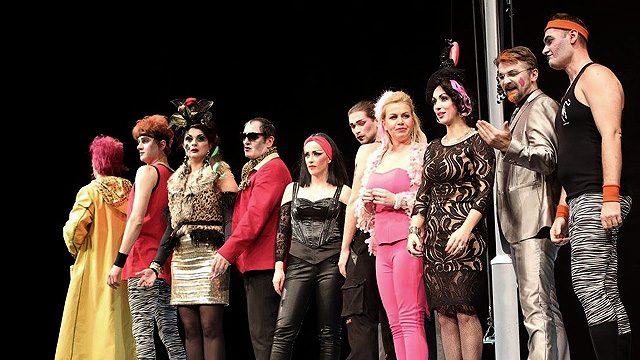 Gian Carlo MENOTTI
“A TELEFON” / “THE TELEPHONE”
Opera in one act.
Adaptation from Serbian translation text by Ira Prodanov Krajišnik.

Samuel BARBER
“A HAND OF BRIDGE”
Opera in one act.
Adaptation from Serbian translation text by Ira Prodanov Krajišnik and Ksenija Krnajski.

Paul HUNDEMITH
“THERE AND BACK”
Opera in one act.
Adaptation from Serbian translation text by Ksenija Krnajski and Bojana Denić.

Music performed by orchestra memebers of the Serbian National Theatre.

These three operas last approximately fifty (50) minutes, and thematically belong to the genre of opera buffo. Selection of these three operas and their topics are: First opera is criticizing excessive use of phone, this being the reason for a young man not to succeed in proposing to his girlfriend: In despair, Ben leaves the apartment rushing off on a business trip, concluding the marriage proposal by phone in a conversation during which Lucy accepts to become his wife; Second is a whimsy comment of usual marital problems, as a phenomenon of current society, presented in a comic manner between two middle-aged couples while playing bridge, fantasizing, unhappy with their private lives, intertwining themes of love, jealousy, marital infidelity and bisexuality; Third is a love intrigue in which jealous outbursts and murder take place (adultery and punishment), but, at the same time, with manipulation of the flow of time. Events take place at a speed of lightning, thus creating a parody of standard scenes from the classical (iron) opera repertoire – deceit, jealousy, murder and suicide.

We will emphasize the fact that these acts, though created in the first half of the twentieth century, are designed in moderate and modernist way so that they are suitable for performance before not only professional audience, but also appealing to a wider, especially young audience. Music in question is sound wise moderately modernistic, therefore appealing to the contemporary audience, economical in duration, i.e. in line with the requirements of the “fast-paced” times we live in. The idea of opera lasting only for ten minutes appears to be almost unrealistic, thus becoming very intriguing and attractive.